This year, 2020, sees the 75th Anniversary of the end of the Second World War in which some 80 million people died. That means that only citizens over the age of eighty have any real memory of Britain being under attack. This lengthy peace has not happened by accident or luck. We have been living under a nuclear umbrella known as Strategic Nuclear Deterrence, formerly known as Mutually Assured Destruction. Initially, our deterrent posture was maintained by the V-Bombers of the Royal Air Force but in 1968, with the advent of intercontinental-ballistic-missile-firing, nuclear-powered submarines (SSBNs), the Royal Navy inherited the role. These submarines have now maintained continuous deterrent patrolling for over fifty years - there's one on patrol right now - but does anyone ever stop to think of the human beings involved? 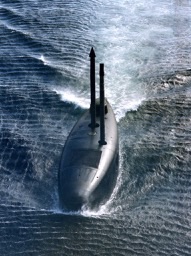 PEACE BE WITH THEM

In the bowels of a beast with a heart of steel,
in Neptune’s black abyss,
stand sixteen silent sentinels
on watch o'er Britain's peace.
And through the black abyssal deep, each day of every year,
the Reaper ploughs the ocean,
and sows the seeds of fear.

In the bowels of the beast with the heart of steel
where the nuclear cauldron boils,
a hundred brave submariners
attend their awesome toils.
Whilst snug in quilted feather beds, full fifty million sleep,
and spare no thought for those at sea
nor pray their souls will keep.